On this page you will find a bunch of different tips & tricks that you can apply to animations that you have imported into the animation frame sequencer; some of these tips & tricks might be applicable to Spine sprite part animation models & 3D character models.

The whole point in this page is give you ideas on how you can optimize your animations & your game overall by reducing the amount of animation frames needed to create smooth looking animations.

What is the Animation Frame Sequencer?

I'm just going to assume that most of you already know what it is, but just in case you don't, it's the animation form you can find around various sections of the Visionaire Studio editor that let's you import or batch import animation frame images into the engine. By default you can control the global duration of the frames, the duration of individual frames, the playback mode of the frames, & the amount of loops the animation should perform - however, we can get a lot more creative with what's possible via action parts, scripting, & some clever edits to the duration of individual frames.

Now before I go over the various animation tips & tricks, we need to setup a few things first that we will need further down the road for some of the methods listed below. This involves a bit of scripting, but don't worry it's nothing complicated. I just need you to navigate to the script section of the Visionaire Studio editor, create a new definition type script, rename it to workflow_functions, & then paste the code below into it.

properties section for the animation, however you can enable the option set pause for each frame, which will allow you to specify a unique duration value for each animation frame. Only frames that have a value other than -1 will be affected by this option. All frames that contain a value of -1 will use the global pause (duration) value.

Using this option lets you create dynamic looking animations where you can give your animations the appearance that they have some weight behind them. It's also a useful method for reducing the amount of animation frames you need to use for an animation, for example... let's say that you want a specific frame to play 3 times in a row, well in other programs you might need to import the same image 3 times to do that, but in Visionaire you can just adjust the duration of that specific animation to last 3x the global pause (duration) value.

This next tip is a bit of a tricky one, but it's one of my favorite methods for turn borning repetitive animations into animations that feel & look more natural by applying a dynamically generated duration value between specific animation frames - it also works a treat for adding a dynamic delay between animation loops.

& open up the action modal box via

2. Inside of the action modal box create a new action via

& then create a new execute a script action part & add something along the lines of this into it...

3. Close the action modal box & the animation frame editor modal box & then select the animation to the right of the one you have just edited & repeat the same steps, except in the execute a script action part you want to reset the pause value back to whatever the global pause (duration) value is that you specified inside of the

properties for the animation, which should look like something along the lines of this...

& that's it. You can use this method on multiple animation frames or even specific ranges of animation frames. Have fun experimenting with dynamic frame durations & don't be afraid to get creative.

With a little bit of scripting magic we can force the engine to loop the animation between a specific range of animation frames or even loop a single frame. This can be useful for controling states, such as: door closed vs door open, etc. though you can alternatively do this via multiple scene objects & linking a condition or value to them to determine which object should be active/visible.

To loop a single frame you can do something along the lines of this...

Or to loop a specific range of animation frames you can do something along the lines of this...

& just to show you how it can be done without the setAnimFrames() workflow function...

Animations can be played forwards, backwards, or the animation frames can be played in a random order. Taking that into consideration it's possible to create pendulum animations that play in one direction then reverse back in the other direction, however we will be saving that for the next section of this tips & tricks guide.

You can change the playback direction of any active/playing animation during runtime with a line of code that looks like something along the lines of this...

There are multiple ways you could achieve this.

1. You could animate the entire thing, but this is bad in terms of optimization.

2. You could call a called by other action action via the execute action when animation ends option that's found inside of the

4a. You could insert a line of code into the first frame of the animation, which would be something along the lines of this...

4b. & then the same again with the final frame of the animation with a line of code that is something along the lines of this...

There's technically 2 move object action parts, but we are going to ignore move object as that one is based on relative offset from the default position, & we are instead going to be using move object to as that one uses absolute positioning, which makes things a lot simpler.

Anyway, this one is simple to use, just create a move object to action part, link it to an object then tell it where to go & specify a duration of how long it should take to get from starting position to the target position.

The tweening function aka the to() function is very useful for creating transitions from the current state of an object/animation/etc to another state, which could be a new position, a new transparency value, or a new scale value, etc. It can take multiple arguments & anything that requires an integer or float number input can be manipulated by it. Here is the syntax for it...

& here is an example of how to move an animation from its current position to a new position...

The bézier curve system is really useful for creating smooth &/or complex paths. It's really great for simulating a bird swooping down into the scene & then back up & out of the scene. You could also use it to control falling snowflakes or leaves, etc.

There are 3 available types of curves in Visionaire Studio that you can use & they are...

This curve mode will allow you to draw a curve that has a starting point & an end point. You can add as many node points as you like & drag them around to manipulate the curve until you end up with something you like. 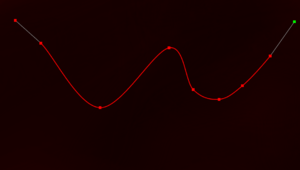 This curve mode will allow you to create one massive curve that you connect back to the first curve node to create a loop. Have fun creating infinity symbols & snakes (ouroboros) eating their own tales. 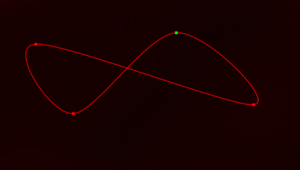 This curve mode will let you create a single really smooth curve that you can adjust after creating by dragging the 2 outer most nodes around. Once you create the initial shape all but 4 of the nodes will be automatically hidden. I'm not really sure what use this curve mode is as you can do the same thing with the first curve option, however this curve mode allows you to create smoother curves overall. 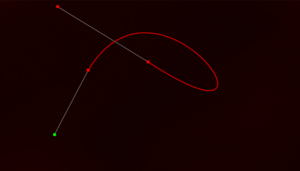 Finally in regards to curves I would like to point out that they are an advanced mechanic & currently there's no way other than scripting available for linking them to scene objects, animations, interfaces, particle systems, etc. If you want to see some curves in action then I would recommend downloading the ved & resource file linked down at the bottom of this page, but just in case you don't want to do that, here's the syntax...

Ideally rotation works best when the image/animation is flat to the screen as opposed skewed. Anyway, you can rotate objects with a line of code that looks something like this...

This one is different from rotation. This allows you to pin a point of an image/animation & then morph rotate the rest of the image/animation. The best way I can think of to describe exactly what this feature does would be to tell you to imagine a flower or a tree that's swaying about in the wind. 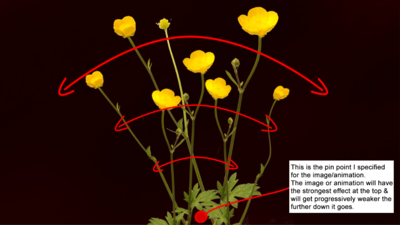 I'm not going to provide you with a tutorial of how to do this, but I will link you to the luadocs page where you need to download & include the script found on the page I've linked to as a definition type script inside of your project. It also contains examples of usage too, so hopefully you will be able to figure it out, but if not you can check the reference ved & resource files I have included at the bottom of this page, which also contains examples of everything else I've mentioned on this wiki page.

There are multiple methods you can use for changing the size of animations & images during runtime, which might be useful in some situations for creating the illusion of depth or purely for the purpose of scaling up or down.

You can scale scene objects (which includes the images/animations linked to them) up & down with a line of code along the lines of this...

or if you want to tween the object scale from the current scale value to another one then you can do it like so...

You can scale animations up & down with a line of code along the lines of this...

or if you want to tween the animation size from the current scale value to another one then you can do it like so...

Actually it's just X & Y, but I felt like completing the alphabet. Anyway, you can use scaleX & scaleY to flip any image or animation that's linked to a scene object or interface button.

Here's a quick scripting example of how to horizontally flip the image/animation belonging to a scene object...

& here's how to vertically flip an image/animation belonging to a scene object...

I know I haven't covered all methods as there are other features you can use such as the action part plugin system, or components, or behaviours that you can create via the visual scripting system, but I've never used the visual scripting system before & wouldn't know where to start. Anyway, if anyone has any other tips & tricks they want to include then please let me (AFRLme) know on our discord server.