Conditions and Values are a fundamental necessity when it comes to game development as they allow us to dictate the events that can take place, have taken place or have yet to take place. They can also be used in "if…else" queries to determine if an event, or multiple events should be allowed to occur based on a condition's value or the integer number of a value.

Both conditions and values can be defined in various locations throughout the editor; there are "Conditions" and "Values" tabs everywhere. From the engine's perspective it doesn't matter where you add them, because they are accessible from anywhere. To keep track of your game logic it makes sense though to add them in places where they logically belong. – If you need a condition called "key_taken" to control the visibility of a key object, you should add this condition to the key object or to the corresponding scene rather than to, let's say a character that appears somewhere else in your game. But wherever you put it, you may always link it for setting the state/visibility of your key.

Conditions are boolean based variables and contain either the value of "true" or "false". You can create 2 types of conditions:

It is also possible to use a value as a string variable instead of as an integer variable. You may set the initial string when adding the value, but you can't change the string via the "Set value" or any other action part, nor can you use the string value in an action part "if…else" query or link it to an object. You need Lua scripting to make use of string type values:

You may print out values as part of a text, both integer and string type values. Use the following markup:

See the text page for some examples.

Try to open a locked chest

Use the "If condition" and "If value" action parts to create these structures. There are more "If" action parts available querying other aspects of the game, such as "If character has item", "If character is on scene", or "If language is current language".

The second use case for conditions and values is linking them directly to objects, dialogs and interface buttons via the "Properties" tab for the aforementioned objects, to quickly determine if the object is active (shown) or disabled (hidden). If disabled then all images and animations for the object will be hidden and all actions associated with the object will also be disabled; the cursor will not recognize the object anymore. This is very useful for quickly changing the environment of the scene or any other scenes for that matter, regardless of whether they are a playable scene, cut-scene or menu. 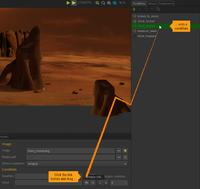 "Drag" a link to the condition

If you want to link a condition or value, you usually click the link button and then navigate to the desired variable in the dialog window. There is a useful feature in the Visionaire editor to enhance that workflow. You can "drag" a connection out of the link button (see image) and drop it onto the condition or value. This is not limited to conditions and values but also works for other elements, like objects. The link button and the element you want to link have to be visible in the editor at the same time though, so you won't reach everything using that method.