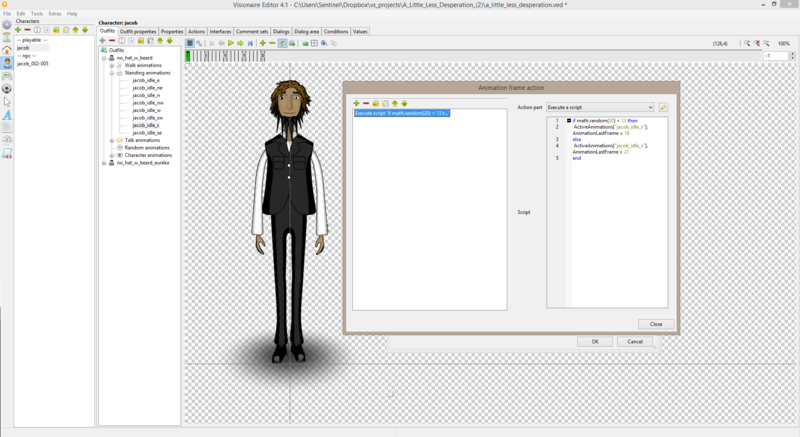 Same principal as Tutorial #1 except this time we will be adding some additional frames to the end of the animation, so that the character blinks twice, though technically I suppose you could also use a value, force the animation to play the blink frames only & increment or decrement the value until the value = 0 then force it back to the initial animation frame - actually now that I think about it, this would be a much better method as you can get a lot more creative with the amount of times the character consecutively blinks, but we'll delve into that at some other point in the future.

Right, so again, you need to begin by attaching enough blink animation frames to the end of each of your idle animations to allow your character to be able to blink twice in a row & then what you are going to do is edit the first frame & create an execute a script action part inside of the actions area for said animation frame. It should contain something along the lines of this...

... again, the "animation_name" should be changed to the actual name of the animation you have added the little script to, & the AnimationLastFrame values should reflect the amount of frames you have used for idle, single blink & total. Remember to take into consideration that animation names are case sensitive.