This section is where you setup the main game properties and global settings. 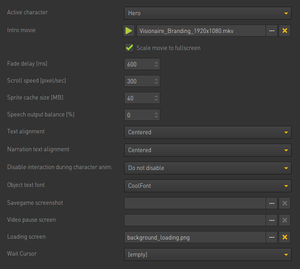 Action text is the text that displays the current command and/or object names when hovering over or interacting with objects, e.g. "Door", "Look at door", "Use key with door" etc.

This section is where you setup global mouse actions. That's things like having the right mouse button always apply the "Look" command or holding the left mouse button display your "coin" style interface. When it comes to interaction with specific objects in your game, you define those mouse actions for the respective objects directly, not in these global settings.

You can setup actions for the following mouse events:

As to the last two events, you can specify the amount of time by which holding of the left mouse button is treated as its own event, in milliseconds ("Time until mouse button hold"). This setting is global, so it applies to individual "hold mouse button" actions for objects throughout your project, too.

Besides the global mouse actions, you may also set the playable character's general reaction to mouse events. In classic third-person point-and-click adventure games, the character always walks to where the user clicks with the left mouse button. If your game has a different approach, you may want to change that behaviour. Define the character's motion for left, right, and middle mouse button click as well as for the "hold mouse button (released)" event by choosing the appropriate "send character" option.

It is possible to change that general behaviour during the game through Lua script. That may come in handy in situations where your character is supposed to temporarily not move for some reason. Have a look at the following example:

In this section you can define global key actions. Add a new action and select the appropriate key you wish to address as the action's execution type. The key selection list contains keyboard keys as well as gamepad keys, both in two variants: "pressed" and "released". You could use this to highlight object hotspots on key press and stop the highlighting again on key release, for example. 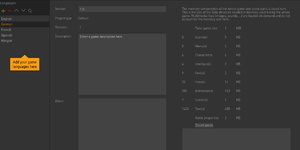 The game info section offers some text fields to enter game version and description. This information is for internal use only; it does not appear anywhere in the final build. There are also some project statistics on the right hand side.

On the left you can enter the various Languages of your game; there must be at least one. It is recommended to use English terms, because the engine will show appropriate flags on text inputs, if it recognizes the language names. As soon as you have added the languages here, you are able to enter translations of your game texts (see the Text page for more on text).