How To Create a Scene Within a Scene (h2)

This tutorial will teach you a couple of methods that you can use to bypass the 10 scene limitation of the evaluation version of Visionaire Studio - feel free to use it in the full version too, as it's a perfectly valid method for myst-likes, hidden object games, & visual novels.

A grid based scene is a single image comprised of multiple scene backgrounds stitched together.

Right, I'm just going to assume that you already have a bunch of scene background images, so start off by opening up Photoshop or whatever image editing software you use. Load up one of the scene backgrounds you have just created & then double the canvas width & height. Now copy in each of the other scenes & position them so that they all fit inside of the image, like in the screenshot below. 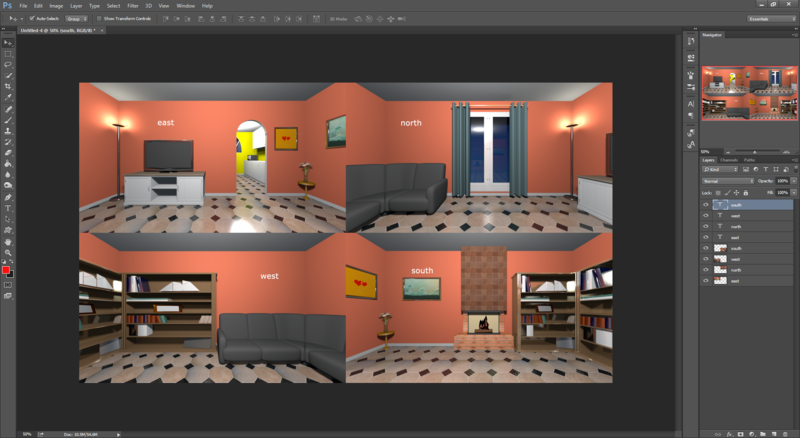 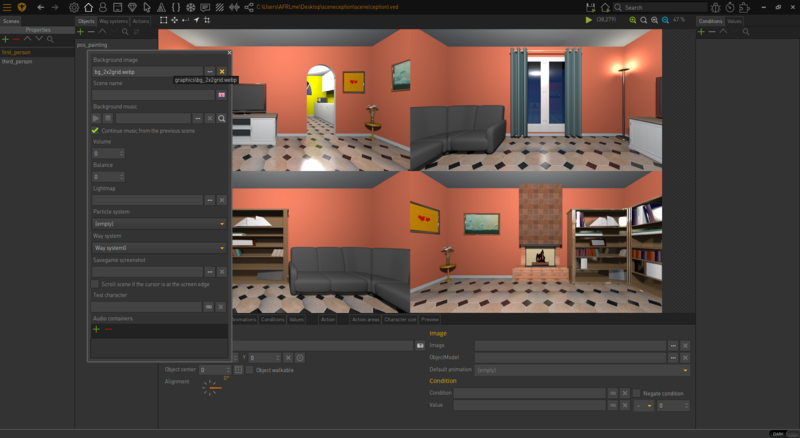 Next create a new value under the scene values tab & name it grid_index. Set the default value to whichever number corresponds with the section of the grid background image you want to display first. Alternatively, you can use the string section of the value if you want to use names instead of numbers to refer to the different grid sections - I decided to use names, in the demo I provided.

Once you have done that, go to the scene actions tab & create a new called by other action, rename it to update_grid. Now create an execute a script action part inside of the called by other action you just created & add something along the lines of this to it... (choose the relevant script). 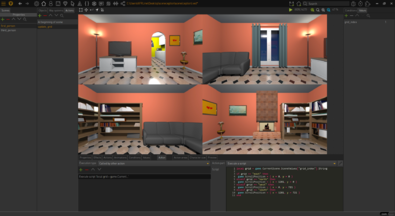 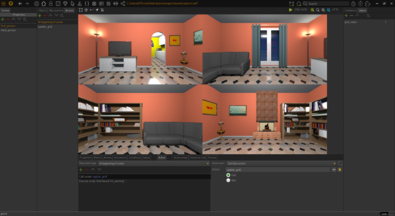 I'm not going to cover how I sorted out the scene change in the demo I have provided in the resource section because it's not very easy to explain. Long story short: to update the scene, you need to update the grid_index value & then call the update_grid action. Yes, it's as simple as that.

An interface based close-up is where you overlay a more detailed close-up point of interest in the scene, such as the books on a bookshelf, or the items on a table or desk, etc.

In Photoshop - or whatever image editing software you use - create a new canvas with a transparent background. The canvas size should be the same size as your default game resolution. Next add a new layer, select all & fill with black, then set the opacity/visibility to about 50% - this will be used to darken everything below the interface when it is visible, so that it removes focus from the playable scene. Next insert/paste in the close-up image of interest & style to suit with a border or a fancy frame or whatever you want. You should also consider creating an X button that the player can click on to close the interface. Anyway, when you are done, you should end up with something along the lines of this... 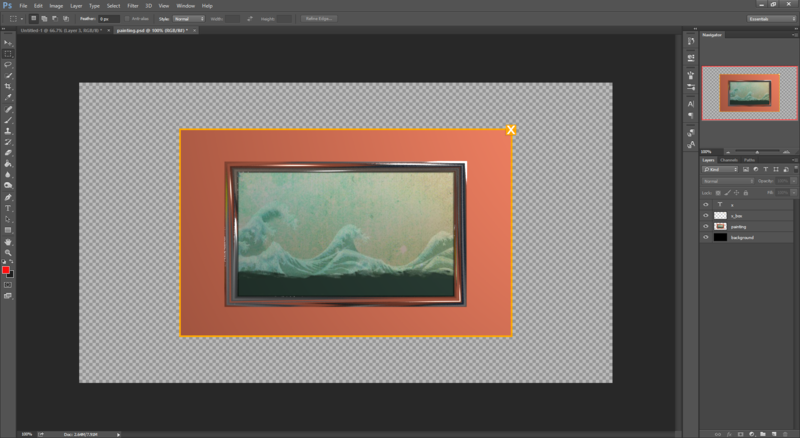 Now you have created the image we want to use for the interface, we need to create an interface to use. So let's do that now... navigate to the interfaces section of the editor. Click on the

button above the interface list to create a new interface, rename it to something relevant. Now click on properties & assign the image you just created as the background image. Set the class (more info in the quick note block below), set displacement to absolute, & then close the properties box. 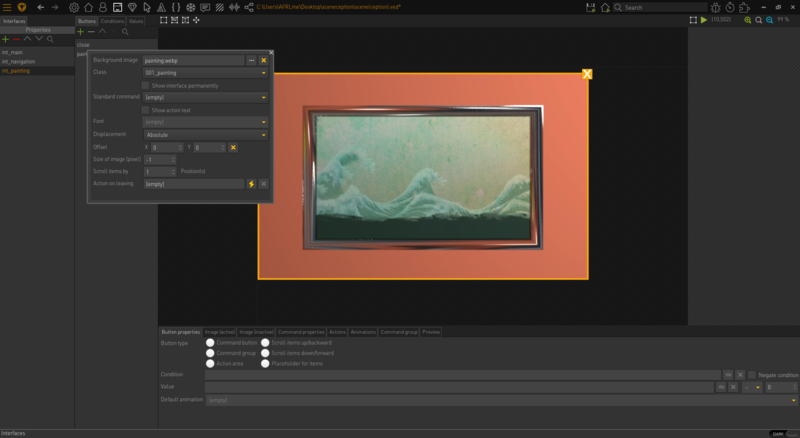 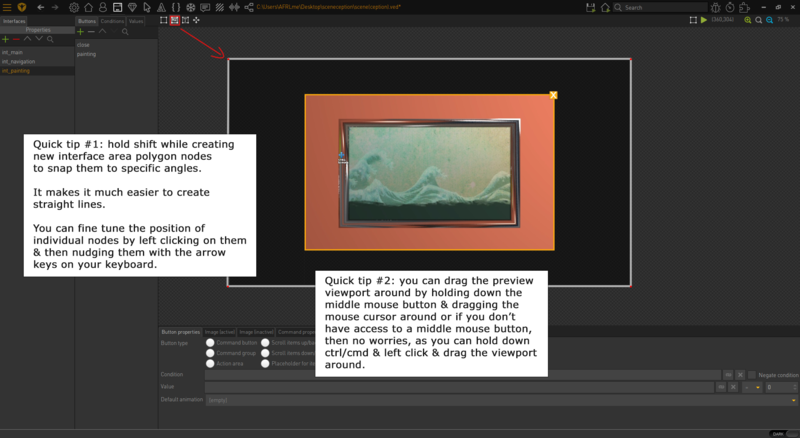 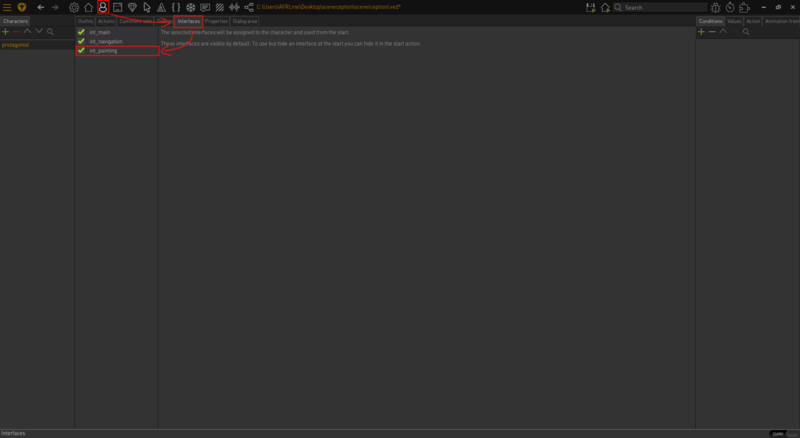 Just two more steps left & we are all done... 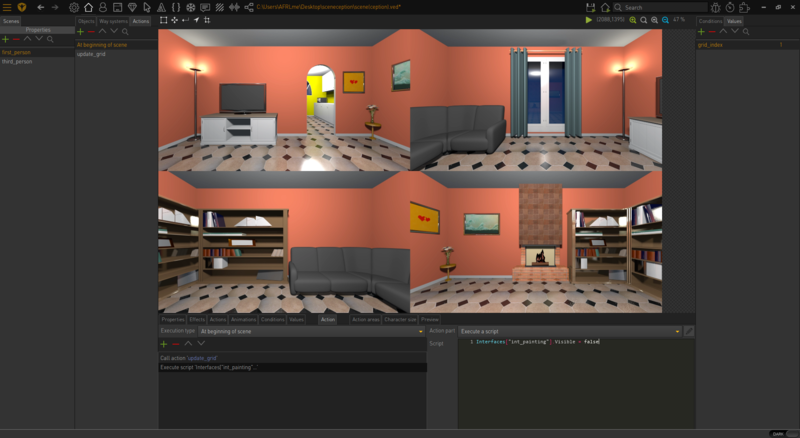 The second step involves setting up the method used to show the interface when the player clicks on the relevant spot/object in the scene. To do that we need to create a new scene object, so do that now. Rename it to something appropriate, then click on the object area button on the scene toolbar & draw a polygon around the relevant spot/object in the scene - object areas are used to detect when the mouse cursor is hovering over the object & that the engine can interact with the object below the cursor.

Anyway... create a new left click (immediate) action - or executed at destination command linked to the relevant command (look, use, etc), if you are using third person perspective. Inside of this action you need to create an execute a script action part & copy the same line of code in again, but this time you need to set Visble as true, instead of false - & remember (again) that you need to replace interface_name with the actual name of the interface. 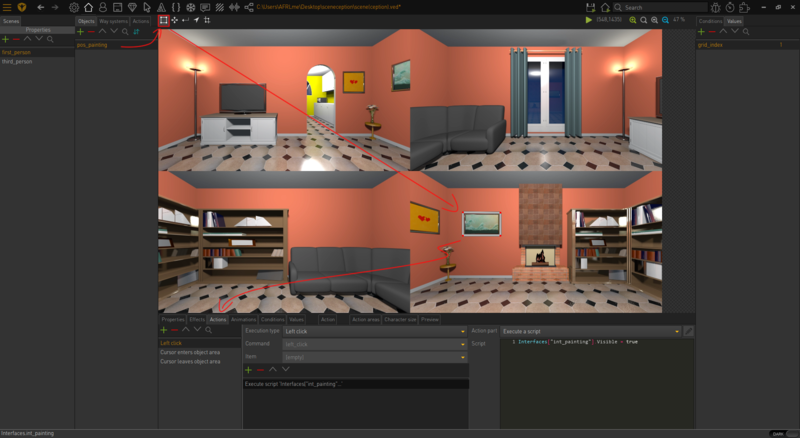